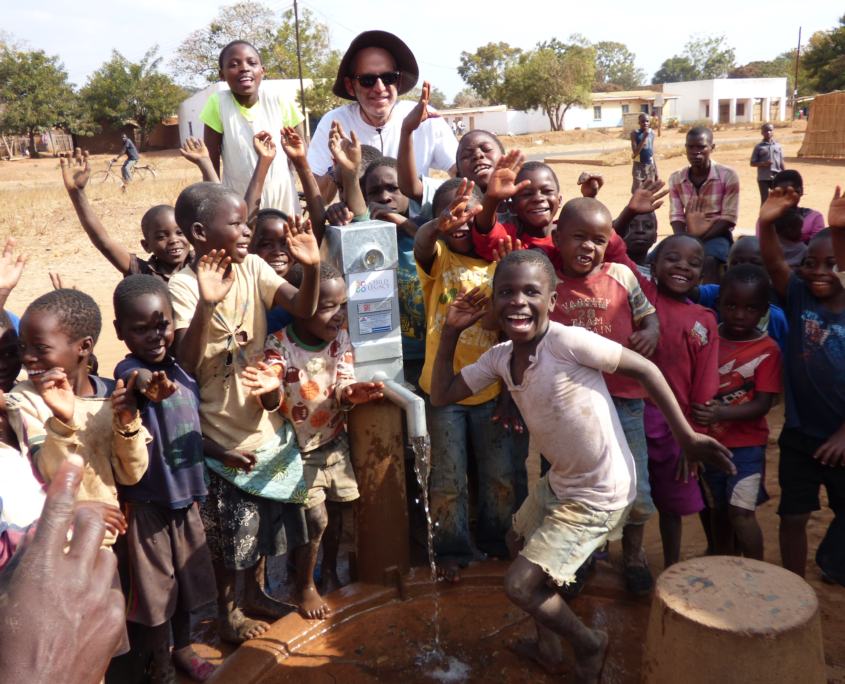 By using the form above, you can make a secure donation via your:

Mike Navolio graduated with a BS and MS in Engineering Geoscience from U.C. Berkeley in 1973 and 1975. He and his wife Jennifer were married in 1972. They have 2 children and 3 grandchildren. Mike was continuously employed since graduation in the oil and gas industry as a seismologist for a number of companies in California, Alaska, and Texas. He retired from Southwestern Energy in July 2018 and now devotes his full time to Child Legacy. Mike founded Child Legacy’s Clean Water Climb in 2010 and has served on their board of directors since 2012.

Mike and his wife went to Kenya and Tanzania on their first short-term mission trip in 2007. They were both 56 years old. “It was a life-changing experience seeing people digging holes in dry river beds for water, scooping out the contaminated water and pouring into 5-gallon Jerry Cans, strapping the bad water onto donkeys, and then walking 20 miles back to their villages.” After returning from their trip questions like “How can this be?” and “What can I do about it?” kept plaguing him.

Haunted by the helplessness he felt to solve this problem, Mike took 2 more investigative mission trips back to Africa to observe, learn, and seek God’s direction. Before leaving on his 3rd trip to Africa in 2009, his friend Denny McGuire, who was also passionate about helping the desperately poor in our world, asked Mike, “After you are finished in Kenya, why don’t you and your friends take a side trip down to Malawi for a couple of days and meet Jeff and Karen Rogers, founders and directors of an organization called Child Legacy, and see what they are doing there?” His team of 6 accepted the challenge and took a side trip to Malawi not knowing what to expect. Mike and his team were amazed to see all of Child Legacy’s work – from the early construction of their wellness center in the middle of nowhere to a village visit where Mike and his team helped repair a broken water well, played with the village children, and shared the gospel. The response to the gospel message forever changed Mike. When 40 or so people came forward to receive Christ, it was another life-changing experience for Mike to lead them to salvation. These people seemed hungry for the Gospel, and it was so simple to share it. Mike learned an important lesson in life: when Godly men and women make a suggestion, it’s a very good idea to seriously consider. Malawi became where Mike believed God was calling him, but what exactly that calling was, was not clear yet.

Mike & The Clean Water Climb
It was while returning from his 4th trip to Africa in 2010 (and 2nd trip to Malawi), that God placed a man in a plane seat next to Mike, who asked him, “What were you doing in Africa?” Mike told him about Child Legacy and their holistic sustainability ministry. Mike then asked the same question of the Englishman who then proceeded to tell Mike that he and 34 of his friends on the plane had just climbed Mt. Kilimanjaro to raise money for a hospital in England. For someone who loves God’s creation, Mike was intrigued and asked lots of questions like: “How high is Mt. Kilimanjaro?” and “What about altitude sickness?” At first it was all about Mike climbing for his 60th birthday in 2011, but then during a BSF study of Isaiah, the Lord led him to ask himself, “Are my plans God’s plans or are they just my plans?” At that moment, the Clean Water Climb dream was born into reality which led to Child Legacy’s 1st annual Mt. Kilimanjaro Clean Water Climb in July 2011, a fundraiser for Child Legacy’s water well repair ministry in Malawi, Africa.

God blessed the effort with over $52,000 in funds raised and with all of the climbers who left the final base camp reaching the summit! Given this initial outcome Mike believed that God was clearly in the Clean Water Climb and decided to repeat the event in 2012 with his daughter Rebekah. God has hugely blessed each subsequent climb in terms of funds raised for Child Legacy’s water well repair ministry. In 2015, a $1,000,000 milestone total for the first 5 years of the Clean Water Climb Fundraising / Mission event was reached, bringing clean water to over 2,000,000 since the Clean Water Climb began in 2011. In 2017 Mike took 2 teams to Kilimanjaro and then in 2018 Mike took 3 teams to Kilimanjaro.  One team included his grandson Elias Blanca and another team he took his pastor Jason Shepperd.  Over the years, there have been many father-son, father-daughter, mother-daughter, mother-son, and husband-wife pairs that have gone.

Since the Kilimanjaro CWC began Mike has encouraged others to begin CWC’s like in the Rockies, in the Andes, and in the Appalachians. All for the same purpose – bringing clean water and the hope of the gospel to those in desperate need of both.